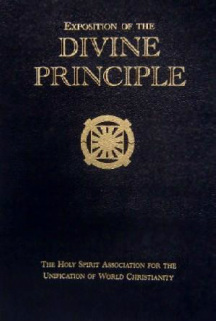 Source: Excerpts from the www.newworldencyclopedia.org

Unification Church members sometimes refer to the Divine Principle (or simply "The Principle") meaning not only the specific translation of Wolli Kangron, but an eternal truth already existing in the universe before the books were written. Indeed, many believe the Divine Principle's overt attitude toward the Bible also applies to itself, namely: "[It] is not the truth itself, but rather is a textbook teaching the truth." (105)
Lectures and Studies